we all knew we were headed for a Louie XVI moment

Sometimes my job is like shooting fish in a barrel. You’d have to have impairments with several of your senses to ignore the “coincidence” of these London riots (and Syrian unrest, plus Yemen, Chile and etc.) and simultaneous release of Watch the Throne. No, I’m not going to spin some conspiracy theory. The thread connecting them is real, and sociological: THE GREATEST WEALTH GAP IN HISTORY.

I am assuming that you can put together, rather quickly, that the riots in Birmingham, Manchester, Salford, London are characterized, in the main, by working class kids (mostly boys, it seems) attacking police and looting businesses. At least, this is what you see/hear on the news (and often, quite racist euphemisms for “young, working class kids” are being used, seemingly, unselfconsciously and even by news readers). But let’s take Bauman’s idea and call it what it really is: “riots of defective and disqualified consumers.” We have all become consumers–perhaps more than we are members of an occupation, or of a religion, or the many other social circles that define us. Bauman argues that,

From cradle to coffin we are trained and drilled to treat shops as pharmacies filled with drugs to cure or at least mitigate all illnesses and afflictions of our lives and lives in common. Shops and shopping acquire thereby a fully and truly eschatological dimension. Supermarkets, as George Ritzer famously put it, are our temples; and so, I may add, the shopping lists are our breviaries, while strolls along the shopping malls become our pilgrimages. Buying on impulse and getting rid of possessions no longer sufficiently attractive in order to put more attractive ones in their place are our most enthusing emotions. The fullness of consumer enjoyment means fullness of life. I shop, therefore I am.

The point may be a little overstated, but it isn’t false. We follow Thanksgiving in the U.S. with a new holiday, “Black Friday.” Girls and women are known especially to handle emotional distresses with some “retail therapy.” And we’ve internalized a sense of our location within marketing “demos,” otherwise, how would we know what new magazine subscription we should choose, or which news channel is best for “people like” us? (Bauman would also like you to remember that Bush called upon us to respond to the terrorist attacks of 2001 by going shopping.)

If you listen to the album’s lyrics, especially if you’re not a regular rap listener, you’re going to be struck by the relative familiarity of many of the references. Gone are the days of “posses” and “bad meaning good.” These rappers talk in the jargon of luxury: Louboutin, Mona Lisa, Larry Gagosian,Rolls Royce Corniche, Hennessey…I could be here all night. If you went to college and took an art history course, if you stay reasonably up-to-date with reading issues of your Vanity Fair subscription, you’ve got all the sub-cultural knowledge you need to understand the album’s “inside references.” White people, delight! In fact, the cover art on the digital edition looks like a gold plate or platter (maybe a mirror?). (Which Hua describes as “Givenchy designer Riccardo Tisci’s gilded, Transformer-at-rest album cover.”) Here is cool, served up on your favorite family heirloom, or hall mirror, or etc. rich-person-reference. 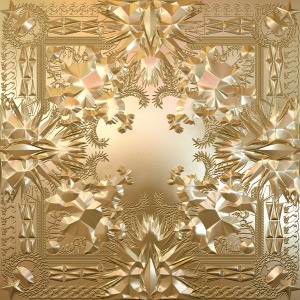 And perhaps the most bizarre thing about this is not that two millionaires released an album where they rap about their wealth, but that they treat it like they got over–that it is some kind of political triumph to have so much money. The implication is stunning–that all these poor folks in London are just some douchebags that don’t love their mothers? Look at how the lyrics address the topic:

The scales was lopsided, I’m just restoring order
Hold up, here comes grandma, what’s up Yiayia?
What’s that smell? Oh I’m just boiling some aqua
No papa, bad Santa
The streets raised me, pardon my bad manners
I got my liberty chopping grams up
Street justice, I pray God understand us

The lyric addresses systematic inequities that left black Americans bereft of the kinds of opportunities to lead to intergenerational mobility, but these guys went into the drug trade, made money and it launched them forward, eventually to successful careers as rappers and producers, and later as entrepreneurs in related industries.

But is the “street justice” of Kanye and Jay Z relatable on the streets of Birmingham? I’m sure the sales of the album are already through the roof, and for all I know, some kid in Nottingham is looting an electronics shop right now only to download the album onto a stolen MP3 player. But I hope not. I think we’ve had enough bullshit from powerful people. I think it is time to get angry about the gap between us and them. Obviously, looting and rioting is not the solution I’d advocate, but I certainly understand, sociologically, why there’s a riot going on out on the street, while Kanye’s worried about what’s going on inside Prive.

Hua Hsu, whom I hold in very high regard, has a compatible, but slightly different explanation. You should read the essay; in it he argues,

There is a broader context for Watch the Throne‘s nonviolent collisions of highbrow and low, opulence and shame, artiste Kanye with “business, man” Jay. Ours is an era of collaborative possibility, when anything from Dockers to a cellular phone pouch can seem desirable with the right synergistic pairing. This is how the business of buying and selling things continues to renew itself, in the endless permutation of new and old. There is something fresh and democratic about it, as the market divides itself up into thousands of little inlets, all the capsule collections and collaborations with Target and down-market bridge lines allowing all segments of the populace to luxuriate every now and then. As a result we’ve grown comfortable with unlikely juxtapositions and mutually beneficial alliances, all in the name of something greater, from “Marvel Comics X Williams-Sonoma” to Pusha of Clipse shouting out the “hipsters” and the “felons.”

You can see that his argument also depends on the inevitability of consumerism, of “monetizing” human activity, of the expansion of capital. I agree that it is curious that we’re constantly re-assigning the values of commodities (what is “high”/expensive is now “low”/cheap and the reverse…look at graffiti for an obvious example of this transition, in the opposite direction), but not as curious when you recognize that all the value is totally arbitrary. We want to insist that Target’s designer lines or H&M’s guest couture designers are creating “lower quality” garments for a mass consumer, but we say that because we’re unwilling to question the value of the expensive garment. How much is the labor time of a couturier “really” worth? How much “should” one cloth cost, or another? It isn’t that these differences aren’t real in their consequences–they are–but they are also clearly arbitrary in their foundations.

Hua–quite rightly, argues that the album:

captures two artists who no longer need dreams; art cannot possibly prophesy a better future for either of them. All of this — the luxury goods, the art collection, private compounds, the Oprah-level American Dream — is their reality. This isn’t to discount all the personal travails or the fantastic demons unimaginable to the nonfamous. But to speak passionately about contradiction offers narrative cover for the truth that one simply knows better, and the album’s anxieties feel like an hour-long quest for the authority to rule from above, a justification to luxuriate.

If nothing else, the album demonstrates a central flaw in an argument that hip hop heads have been making for years: that the music needs to change as the fortunes of its performers change. We’ve said for years that it is not “real” for a successful rapper to write songs about poverty–that isn’t sincere, not authentic. And rap is a world obsessed with authenticity. So, we had to draw the conclusion that as soon as some of us had made it–really and truly made it (i.e., produced intergenerational wealth, which is–interestingly–a lot of what the song “New Day” is about), that rappers would have to change their lyrical content.

Well, here are the fruits of that. Two fatuous, wealthy rappers celebrating their good fortune in the face of massive global inequality. Good on ya.